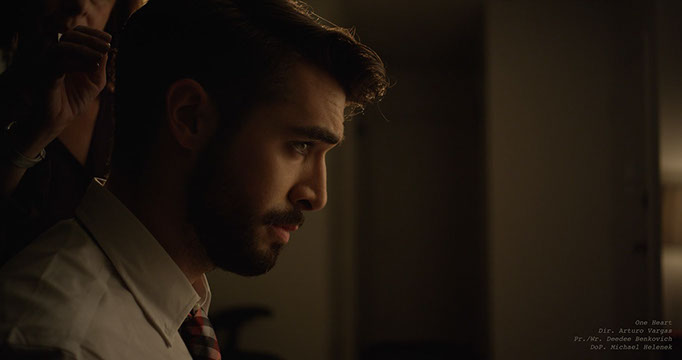 Recently I had the opportunity to work with Director Arturo Vargas and Producer Deedee Benkovich on a short film titled One Heart.  Deedee not only produced the film, but also wrote the screenplay, which is a wonderful piece.  One Heart explores the many roles we take in our lives, how others perceive us, and how our positive reactions can counter received negativity.  One Heart brings us on this journey via its protagonist, Joe, played by Cody Derr (pictured above).

Several weeks prior to filming I met with Arturo, the film’s director, to discuss our visuals.  From the beginning, Art wanted each of the film’s worlds/locations to have a distinct feel in terms of color palette and lighting.  I found that idea exciting.  I mentioned to Arturo that the script felt like a tale to me– almost like something out of a storybook.  I proposed to him the idea of moving the visuals a little bit away from realism and more toward magical realism.  I wanted the audience to feel slightly like they were in another world (despite ordinary settings) for most scenes in the film.  Arturo was on board with the idea.

The three different worlds in One Heart were an apartment, an office, and a nighttime alley.  For the apartment, Art and I discussed creating a very warm and nostalgic feel while maintaining dark areas in the frame to heighten the mood.  I wanted to create very soft light that was pleasing on the actors faces, but I also wanted the images to have high contrast.  In order to achieve the slightly “fantastic” quality that we were going for, I tried to introduce eyelights and hairlights whenever possible. 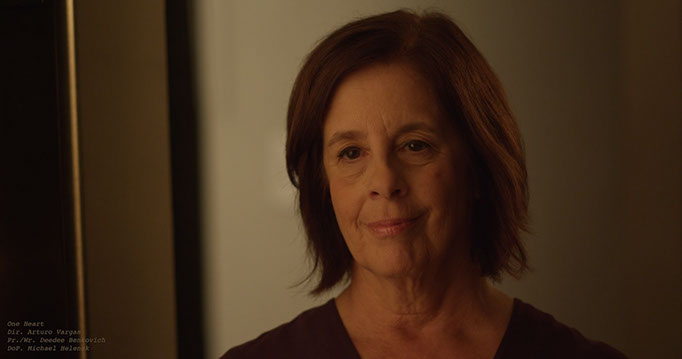 To accomplish the warm color palette, we utilized an antique suede (if memory serves correctly) warming filter, which, to my eye at rental house, was a very mild yellow.  We then set the camera at 4000 degrees kelvin in order to introduce some orange and effectively warm up our tungsten fixtures without the need to gel.  In a couple instances, typically on our backlight, our gaffer Rene Yescas added a some 1/4 or 1/2 CTS, or introduced a dimmer to add additional color, but that was the exception, not the norm.  Our keylight was a 1k book light created with ultrabounce and half grid cloth.  The booklight created a massive and soft source, and introduced necessary eyelight.  In most instances our booklight was around 6x6 in size, but in one or two instances we went as large as 8x12 in the tiny apartment in order to cover the required area.  Thank you to our key grip, Darren, for executing some big cutting and shaping in a very small location.

In order to get a “glint” on the hair, we usually opted for a small fresnel backlight (300w).  However, in some instances when a more subtle back edge was required, we utilized a 500W ECT globe in a small video pro chimera, or a leko bounce when rigging a units wasn’t possible.  The choice of unit determines the quality of the hairlight– something that was very important for the look of this scene. 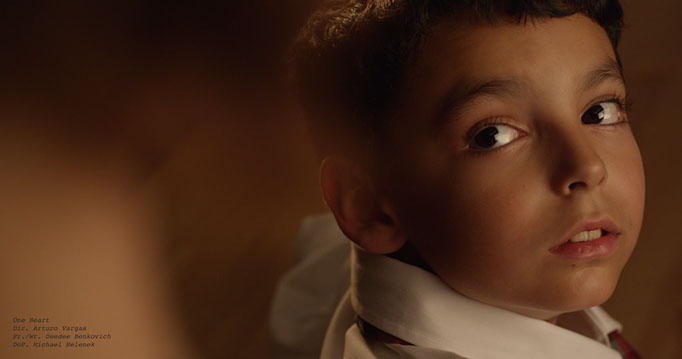 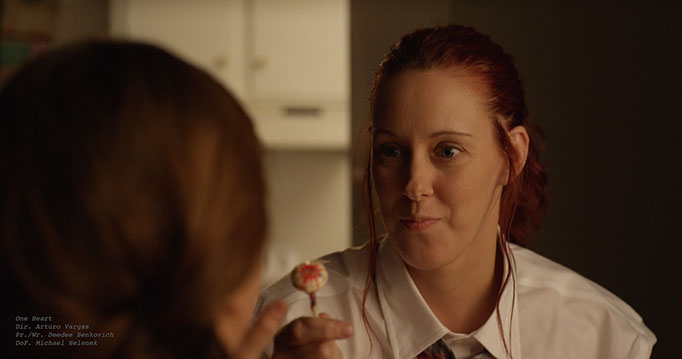 Joe’s office was our second location.  It called for a look that contrasted the family apartment setting.  Our producer, Deedee, was able to secure a classroom that the art department transformed into a small office.  Like most classroom settings, the location had overhead fluorescents, coupled with large windows, that at some points in the day had direct sun and at other points did not; not exactly ideal lighting and color temperature conditions especially for a piece that we wanted to have a specific visual “look”.  In pre-production Art and I discussed the office being slightly blue/grey to contrast the warm apartment.  We also discussed having very soft light, possibly from a side overcast window. 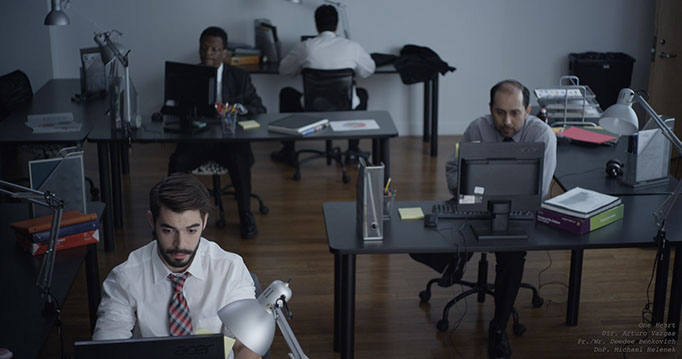 In order to accomplish the visuals we wanted, and to be able to mold our lighting, I decided we needed to start from scratch.  Our team blacked out the windows and we turned off the overheads.  Our solids on the left side of the set not only served to block the daylight, but also to decrease the fill level on the left and created good contrast.  We decided to do a very large soft push from the right that would cover the entire set, and then to add more exposure to key characters at certain sections of the source.  For the middle and back of the room, we pushed a couple 4ft 4bank kinos (5500k) through a 12x12 light grid, and for the section close to camera by the protagonist, we bounced a 1.2 HMI into an 8x8 ultrabounce and booked it with a 8x8 light grid.  Instead of hitting the 1.2 par solely into the ultrabounce and having it return straight back, we additionally made use of the white foam tiled ceiling, in order to have the light not only push from the right, but also from the top.  I enjoy utilizing a source this large on a face, because it creates a very natural looking light and a natural eyelight.  We added a subtle backlight to the main characters to separate them from the background via a couple tubes on a 2ft 4bank kino flo armed out over the set. 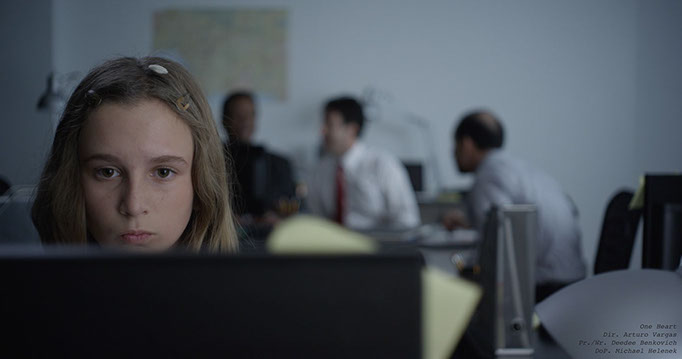 Jillian Metzker at her desk while co-workers conspire behind her.  We used an ND.3 in the office to bring our shooting stop down to a T2.1 (wide open on our Zeiss standard speeds) for desired shallow DOF.  Office camera settings: 4600K / ISO 640.

Our third “world” and third location was a nighttime alley in downtown LA.  The intention of the visuals in this section was to create a feeling of isolation, loneliness, and quiet, at least in certain segments of the script.  We also wanted to subtly maintain a bit of magical realism or fantasy, via similar techniques that we utilized in the apartment.

For our first setup, Joe walked toward camera from 50-70 yards away.  There were three goals with this setup: one, to give Cody a backlight for the duration of his walk toward camera, two, to have him walk into a very subtle and soft fill light (and eye light) as he got closer to camera, and three, to light the alleyway and area around him to create some depth.  I wanted most parts of the frame to remain dark– solely lighting specific areas.

For Cody’s backlight, we utilized a 1.2 HMI par nearly 100 yards away from camera.  A 1.2 par at that distance doesn’t give a tremendous amount of light, but with a spot lens, the output is increased tremendously.  Additionally, we didn’t need much light for the backlight– just enough to rim the hair and separate Cody from the background.  Our grip team did a great job of cutting the light from the HMI so that it didn’t hit the ground or the building and solely illuminated Cody’s head and shoulders.  We only partially corrected the HMI toward tungsten (1/4 Cto) so that it would remain a bit blue.

For Cody’s fill light we tried to create as big of a source as possible given our resources.  We placed two 4ft 4bank tungsten kinos and one 2ft 4bank tungsten kino about 15 feet in the air.  The kino flos pushed through an 8x8 light grid frame that was directly over camera and angled slightly downward.  As Cody walked toward camera he gradually gained some subtle exposure from this large soft source.  We didn’t need much, but just enough light to see the detail in his face and his torso, likely a few/couple stops under our shooting stop of 2/2.8 (ISO 640).  Our grip team sided the 8x8 source off of the camera left building with a 12x12 solid.

Rene Yescas (gaffer) and I played with the light in the background.  The post office across the street was hit with a VNSP par64.  This created depth in the shot.  Several 1k and 650w fresnels, just off of camera right and posted high up, were used to create the lighting on the camera left wall all the way into the background.   Some beautiful green fluorescent light streaks across the distant pavement, which adds some color variation to the scene.  That existed naturally at the location and we decided we like the way it looked, so we kept it. 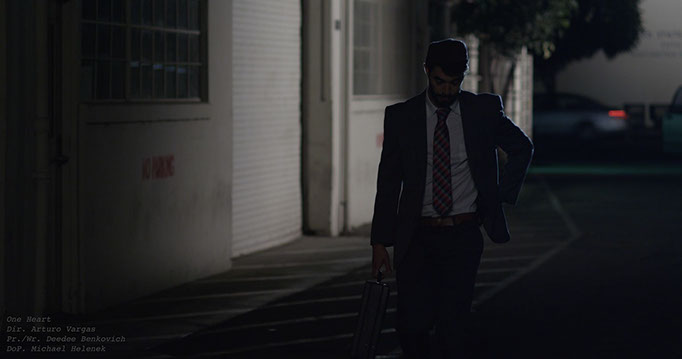 Once we had our base set up, remaining setups only required small adjustments.  We continued to use our 1.2 HMI par backlight and our units that lit the alleyway and building.  When we moved in for close ups we brought down our overhead 8x8 kino flo rig and moved our kino flos in close, often putting two of them side by side and double diffusing them through 4x4 diffusion frames and then a 6x6 or 8x8 half grid.  Here are a few of the close ups from that set up. 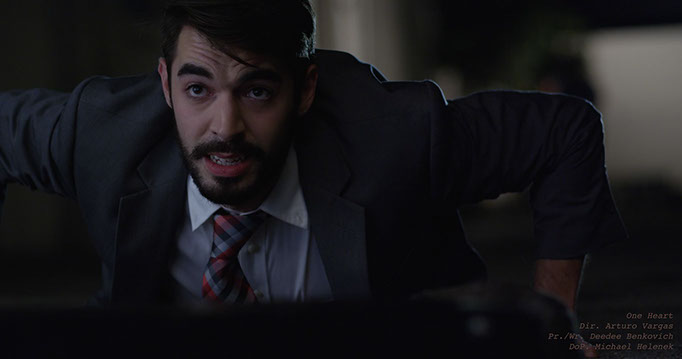 Joe played by Cody Derr.  Close up of the set up described above. 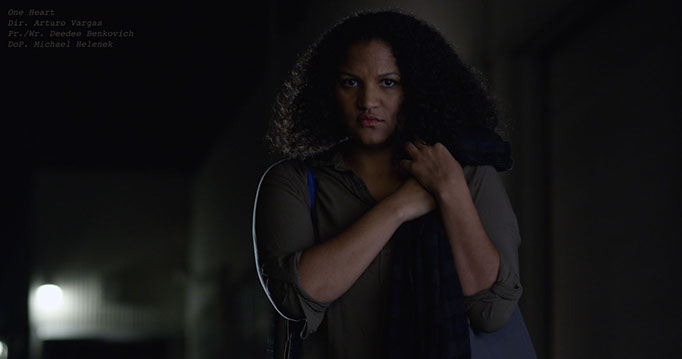 Victoria Dunn.  Reverse angle.  Set up described above was flipped. 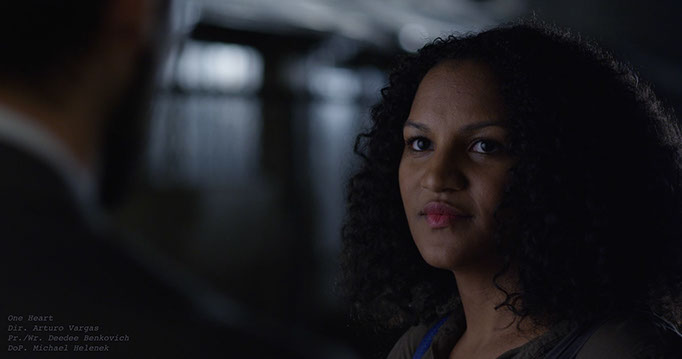 The final set up we did that evening took place at a bus stop that our crew created via some minimalistic production design and dedicated lighting.  The goal with this series of images was to create a feeling of loneliness and isolation.   The tone dictated a very simple lighting setup consisting of three units.  See the below captions for details. 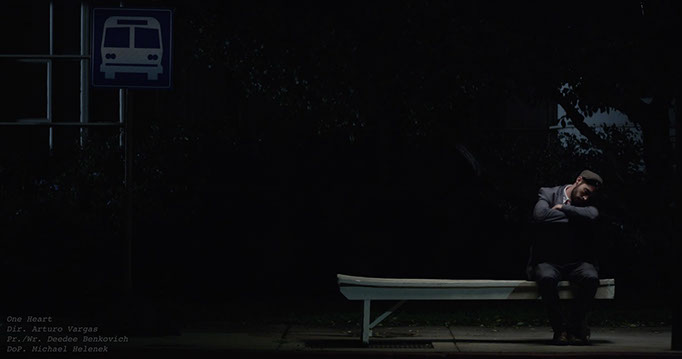 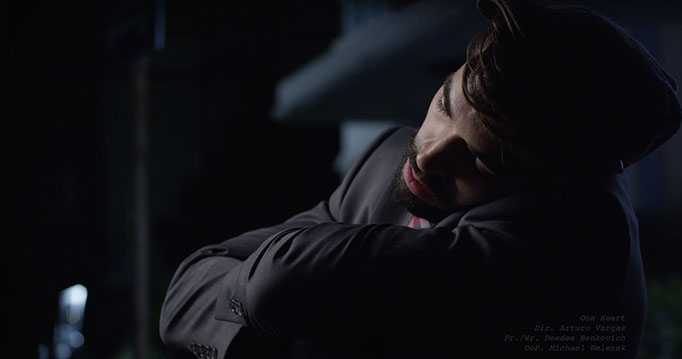 One Heart was a wonderful story that was easy to get behind photographically.  Thank you to both Art Vargas and Deedee Benkovich and our great crew, without whom none of these images would have been possible.