This past summer, I had the opportunity to work with Writer/Director/Producer Christiano Dias on his short film, King Eternal.  The film explores how a young boy, Nicholas Orville Remington, copes with his parent’s divorce through his toy action figures and childhood imagination.

For the scenes involving Nicholas’s imagination, Christiano and I chose a very simple and static shooting style.  We placed characters in traditional framings and tried to exploit our mountainous background as much as possible.  Both Christiano and the actors did a wonderful job of creating a comedic and playful tone for these scenes. 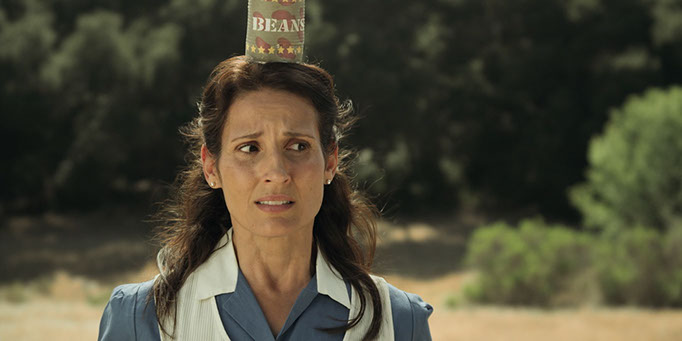 Per outdoor location restrictions, we were unable to utilize any large overheads to cover our ensemble cast or to cover actors’ movements throughout the scene.  Additionally, stand limitations existed so shiny boards were out of the question.

Despite our limited resources, we were still able to accomplish our photographic goals with our hardworking crew.  We adopted several techniques to use the sun to our advantage throughout the day.  In some instances we placed the sun at the actors’ backs for a natural back light.  In instances where the sun was directly overhead or frontal, we placed a 4×4 frame of opal frost or hampshire frost overhead to take the hard edge off the sunlight.  Bead board, hard white and muslin bounces, and 4×4 floppies were then used to add light and to model the actors faces.  4ft x 4ft handheld silver bounces were sometimes used in place of shiny boards to create back edges.  In group shots where we only had enough grip equipment to light one actor, the War Nurse Abigail (played by Lisa Roumain) was the recipient of our lighting.  The other male actors were only lit in their close ups. 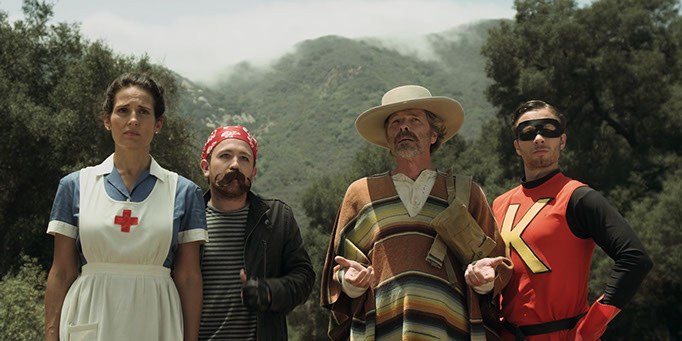 We shot on the RED ONE MX with the RED 18-85 T2.9 zoom.  At ISO 800 and 24fps, the direct sun in Southern California was giving us over an f64, necessitating the use of around 7 stops of ND filtration to bring our shooting stop into the range of T4 – T5.6 (with direct sun landing around a stop over exposure).  I had no worry about bringing the stop down into an appropriate range since for the second time, I was lucky enough to work with the highly skilled 1st AC Alex Grossfield, who pulled incredibly well throughout the shoot for many challenging shots.

In pre-production, Christiano and I discussed adopting a style of “magical realism” for the world of Nicholas’s reality.  Photographically, we tried to integrate flowing camera movement, more exaggerated colors and deeper shadows in many of the scenes.  We also tried to use blocking to express character relationships.

In one of my favorite shots Nicholas exits his house, walks through the back yard, enters his fort through the draped door, and turns on the lamp, silhouetting himself to camera.  We tracked Nicholas on 24 feet of dolly track as he walked through the yard.  Our base ambient moonlight came from frame left in the form of a 2k open face with 1/2 CTB bounced into an 8x bleached muslin.  This source also provided a soft side edge on Nicholas as he moved through the yard and added some exposure on the house.  Another unit with 1/2 blue hit the house through a branchaloris.

As the camera dollied right, the fort was revealed which was 3/4 back lit by a NSP par can (1/2 CTB) rigged to the roof of the house and aimed through the backyard trees.  Nicholas walked into this back light, as well as a soft overhead top light, created by a 4 x 4 beadboard bounce (also 1/2 CTB).  He enters the fort, sits and turns on his lantern, which silhouettes him against bed sheet covering of the tree fort.  We used a light gag for this effect to make it more powerful. 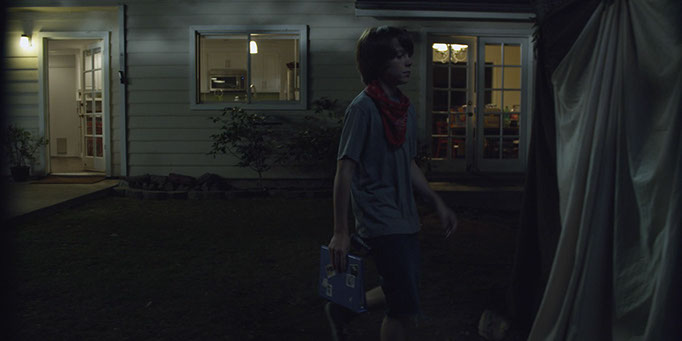 Landon walks to his fort. 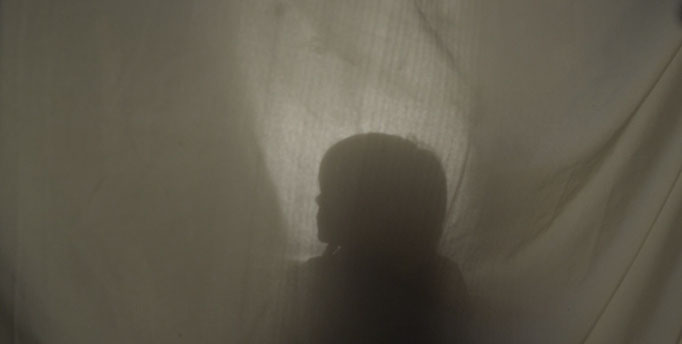 Nicholas turns on his lamp and is silhouetted to camera.

Nicholas and his step father have many exchanges by the door of the fort. We played the warm light from inside the fort and cool “moonlight” from the outside of the fort.  The colored lighting and the excellent set and costume design (Kim A. Tolman, Emily Ng Little, Kellie Terwilliger) added interest to each frame.

John, played by Joseph Bottoms, talks to Nicholas at the door of the fort.

Nicholas listens to his step father.

For the second to last shot of the film, Nicholas runs from the fort to his fallen step father.  Our gaffer (Lee Young), key grip (James O’Connor), and grip/electric crew did an excellent job lighting and shaping this shot.  They created a high angle warm book light coming from camera left.  The same 8x bleached muslin 1/2 blue bounce illuminated from camera right.  A 2k blonde through a 4×4 250 frame high up and deep in the backyard backlit Joseph Bottoms in the foreground as well as the fort in the background. Lee Young placed a china ball in the fort to simulate the fort lamp.  Finally, a fresnel with 1/2 blue streaked across the grass and highlighted Nicholas’s legs as he ran toward his father.

We let the shot fall quite dark in most areas of the frame and just gave hints of exposure letting much of our light (ie: our warm book light) fall around two or even three stops under exposure.  Our highlights accented Nicholas and his father. The illuminated fort partially silhouetted both characters throughout much of the shot.

King Eternal started with a great story and a very passionate director who was able to assemble an excellent team of actors and crew to create a touching film.  A big thank you to both the camera team comprised of 1st AC Alex Grossfield, 2nd ACs David Mori and Topher Jones, and DIT Max Sun, and also our lighting crew comprised of Gaffer Lee Young, Key Grips James O’Connor and Jeremy Dickie-Clardy, Dolly Grip Ryan Wong, and Grips Allison Parham and Jose Cortes.  Below are a few additional images that our amazing team created. 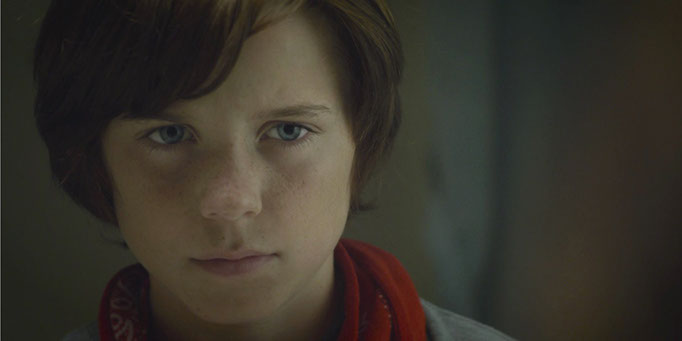 Nicholas stares into the bathroom mirror.  A 650w fresnel fitted with a chimera and fabric grid lights Nicholas from above.  A single 2×2 kino tube through a 4×4 diffusion frame adds some exposure on one side of Nicholas’s face. 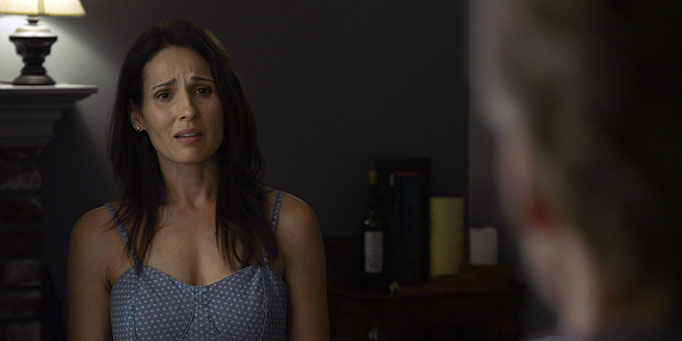 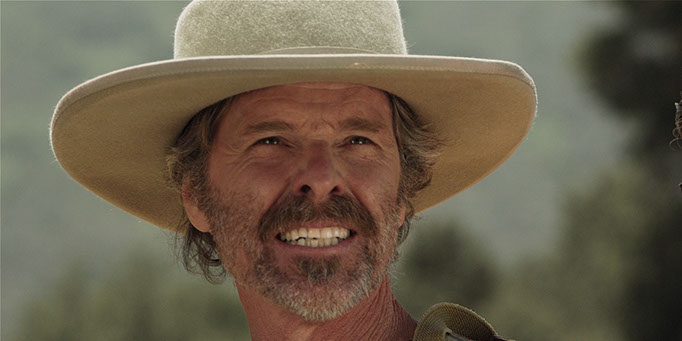 Joseph Bottoms plays the Bandito in Nicholas’s imagination. ND filtration allowed us to achieve the desired depth of field.

King Eternal has been selected at 10 festivals and has won awards at five.  More information about King Eternal is available at: https://www.facebook.com/KingEternalFilm.