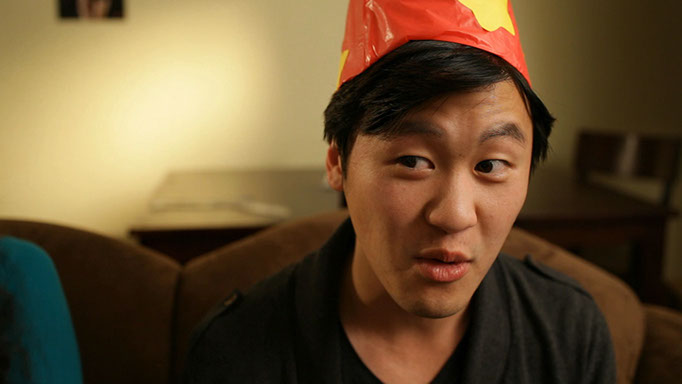 Recently, I had the opportunity to work with a great group of people on a short film titled Dungeons and Dorks. I was contacted by Jimmy Yen in 2012 for his short film that was part of a larger web series, Trees Companee.

Jimmy Yen (pictured above) not only wrote and directed the project, but also stared in it. He was complemented by four cast members who played Isabelle, Sam, Eugene, and Terry. For the duration of the comedic short the characters sit around a coffee table playing the board game Dungeons and Dragons.

Jimmy and I spoke in preproduction about having the lighting show the passage of time as the characters played Dungeons and Dragons at the table. We ultimately decided on three lighting styles: one for early afternoon, one for later in the afternoon, and one for late in the day just before sunset.

As we formed the lighting design, we wanted to have controllable sunlight coming in the window. On many films, this would be accomplished with either HMIs or large tungsten sources outside the window. However, due to financial and other limitations this wasn’t feasible. Our budget couldn’t afford HMIs or large tungsten units, and our set was on the 2nd floor of an apartment. Placing stands outside or tenting the windows was out of the question.

We started by blocking the 20 foot by 10 foot high windows to the apartment with black plastic sheeting to cut off the varying daylight. We then created our own. We purchased two 4×8 bead boards that we rigged right in front of the windows to create a massive 4×16 foot bounce card. I wanted a very large soft source that mimicked ambient daylight spilling in a window. Given that the larger the source generally means the softer the source, this seemed to be the obvious solution. When creating a soft source, one has the choice of either bouncing or diffusing (or both), but diffusing simply wasn’t an option. Give the size of the apartment, there was not enough distance for a beam achieve the spread needed to fill a large diffusion frame. Bouncing allowed us to create a very large source even though we had a modest space. 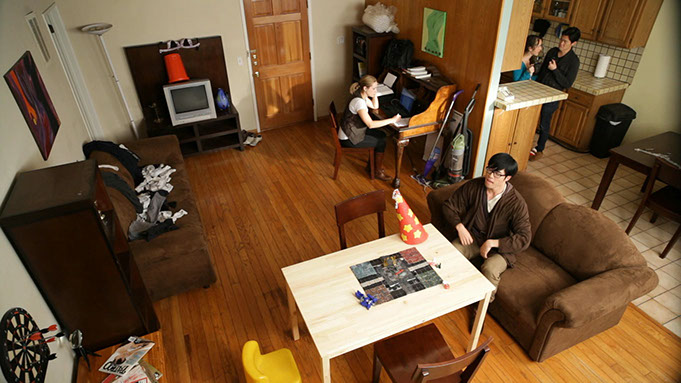 Picking the right unit to bounce into the 4×16 bead board took a little research on my part. I knew we needed a lot of power given that we would lose intensity in the bounce and given that we needed to reach an F4 at ISO 320. We were limited to 2k lights as we were on house power. 2k juniors and 2k mightys were considered but quickly eliminated because their beam spread was much too narrow and they would not fill the entire bounce from the close distance that our set mandated. The units that finally solved our problem were the infrequently used 2k open face nook lights. The 2k nook has a much wider beam spread than either the 2k Fresnel or the 2k mighty, even if they are at full flood. We bounced one 2k nook into each 4×8 card, and from a minimal distance (roughly 4-5 feet) we were able to fill the entire 4×16 surface. This created a massive soft source which occupied little real estate in the apartment unit. The height of the 4×16 bounce was about 6 or 8 feet off the ground so that it mimicked light coming in from a side window, but was also a bit elevated in order to be more pleasing on the actors’ faces. This soft, but directional source created our main exposure in the apartment. 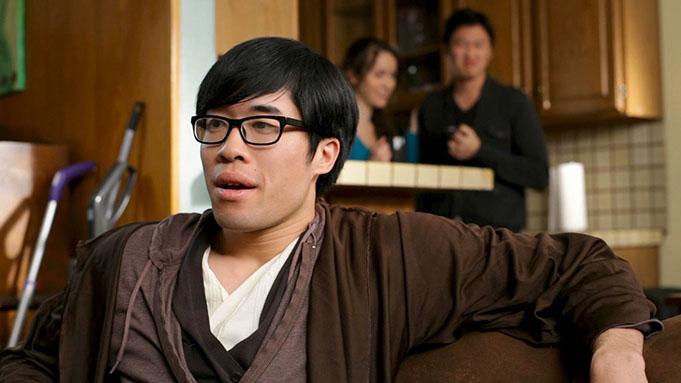 Next, we decided to create some sunlight accents. Knowing that these accents would have to compete with the ambient exposure of F4 (at ISO 320), I had ordered three powerful units with a long throw and a lot of punch for this purpose: one Leko with 19 and 26 degree lenses, one medium par can, and one narrow spot par can. The units proved to be just what we needed. The narrow par can was able to create hot sun on the middle of the set (reading around F8/F11) and on the back of the set (reading around F5.6). We warmed up the par can slightly with ¼ CTO or CTS. The 2k nooks into the bounce were not gelled. The color temp was set at 2900K. This allowed the direct sun par can to be white, and the bounce light to be a little cool. With a lot of planning and a little luck, it worked out perfectly. Jimmy Yen, our director, commented at the end of the shoot that he was very pleased with the fake afternoon daylight that our lighting team created. The only other major strategies in this first scene were to use 4×4 floppies to decrease some bounce exposure on the side walls when shooting singles on characters at the table. Sometimes we used a 2×2 tungsten Kino with ¼ CTB to give a cool mild back edge, just for an accent and a little background separation. 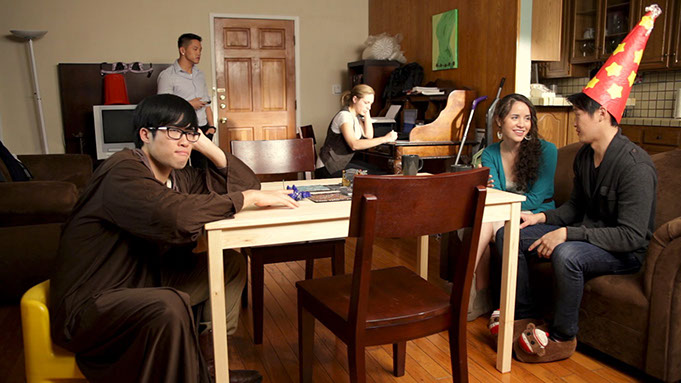 When we moved into the second scene of our film, we only made minor adjustments. We wanted the scene to be a bit warmer and we also wanted to move the sun around to show some mild passage of time. We changed the color temperature on the camera from 2900K to 3200K to increase the warmth and we replaced our narrow spot par can that that was hitting the back wall with a 19 or 26 degree Leko and changed the highlight position and angle. We added some abstract sunlight hits to the back walls behind the actors and changed our 2×2 cool Kino backlight to something a bit more orange. The transition from scene 1 to scene 2 was just a mild one. 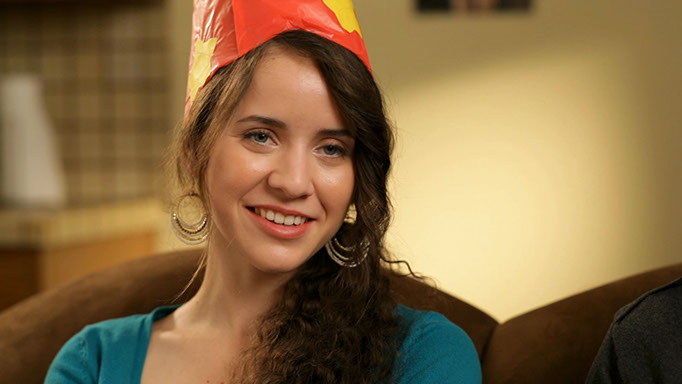 Our third and final scene proved to be a lot of fun lighting-wise. We tried to create a slightly abstract late day look that mimicked sun entering a window slightly before sunset and bouncing around the room. The look was intended to be a little spooky, but in a comical way. A direct sunlight and a cool blue a near dusk ambient daylight were our only motivating sources.

We started out by bouncing two 1k units into 2 bead boards; one from window side and one from a frontal angle. The 1k units were gelled with ¼ or ½ CTB to give a slightly cool ambient fill light that we set at about 1 – 1 ½ stops under our shooting stop (F4 @ ISO 640). We then used a medium par can gelled with ¼ straw to create a beam of sunlight that hit the center of the table right between the actors. The bounce from the beam became our primary lighting source on the actors’ faces. In several instances we either softened it with some white diffusion, or enhanced it with a gold bounce. A 2×2 tungsten Kino with ¼ CTB was used to give a mild backlight in some instances. 650W fresnels were used to create hits on the back walls, and 90W halogen spots (hardware store) were used to create hits deep in the background. 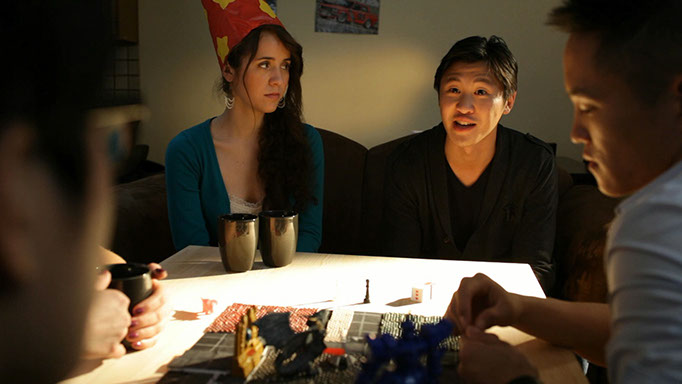 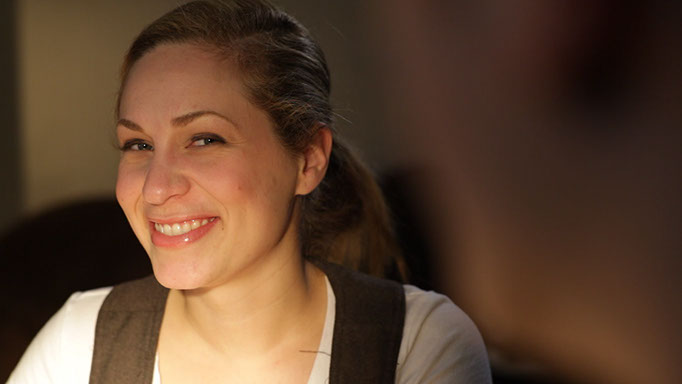 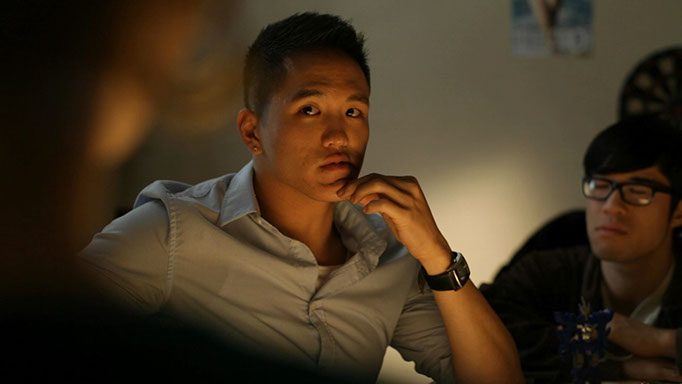 In the script, Eugene (played by Alexander) is marginalized and left alone by the other players. In support of this theme, we left Eugene in the shadows and simply lit the wall behind him. 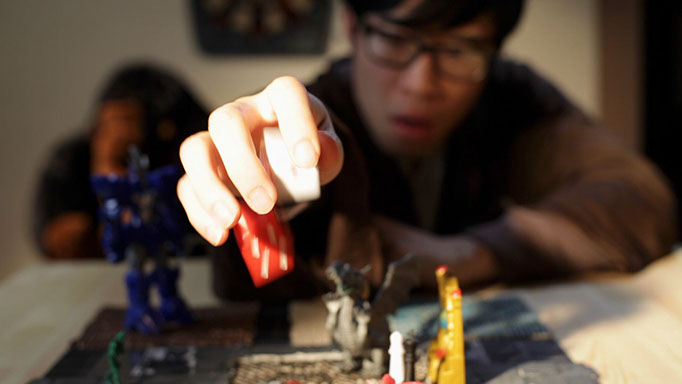