Heart of man round table 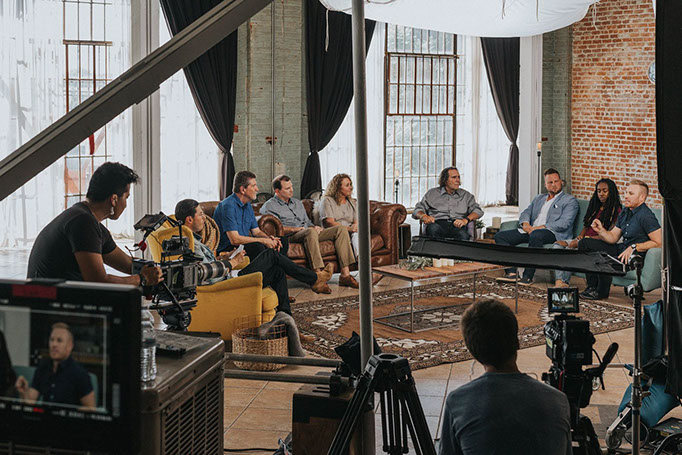 A few weeks ago I received a call from Jens Jacob at Sypher films.  Jens had recently completed post production on a feature film titled The Heart of Man.  The Heart of Man is a religious film containing both documentary and narrative elements, and was set for theatrical release on Thursday, September 14th.

HQ Studios in Los Angeles was selected for our filming location.   Jens had been attracted to the architecture, design, and large windows of this beautiful space. 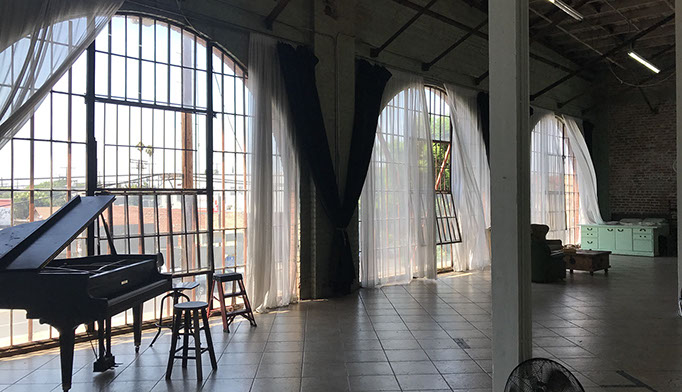 As would be required in any spacious location with large windows, we found ourselves needing to do some light balancing.  The space was on the second floor and the windows looked out onto rooftops and Los Angeles sky, both extremely bright, giving reflected readings of about f45 or f64 (ISO 800).  The windows were western facing, and we knew that later in the day, around 3pm, the sun would begin streaming in and hitting our white shears, yielding readings far over f64.  In the center of the space, where the round table discussion would occur, the incident lighting reading was between f2.8 & f4.

It quickly became obvious that our lighting task would be to reduce the difference between the light level near the discussion participants and the light level outside.  We didn't want the faces to go dark and we wanted to retain highlight detail in the beautiful windows and in the exteriors.   We also wanted the lighting to look natural and have an ambient quality.  I decided that if we could get the exposure of the discussion area up to an f8 or f11, the outside areas would then fall around 4 to 6 stops over our shooting stop, which would appear natural and allow for some color and detail in the highlights.  When the white curtains were hit with direct sun, they would undoubtedly blow out, but that was something we would have to accept, as we didn’t have the resources to control the sunlight.

The eight people in the discussion were arranged in a 15-20 foot semi-circle.  We had one wide camera, which included all participants from left to right, and two longer lensed cameras flanking the wide which picked off close ups of whoever was speaking.  Gaffer Rene Yescas and I threw around a few ideas and ultimately decided that the best option would be to have two very large sources, one from the top of the set, and one from the floor. 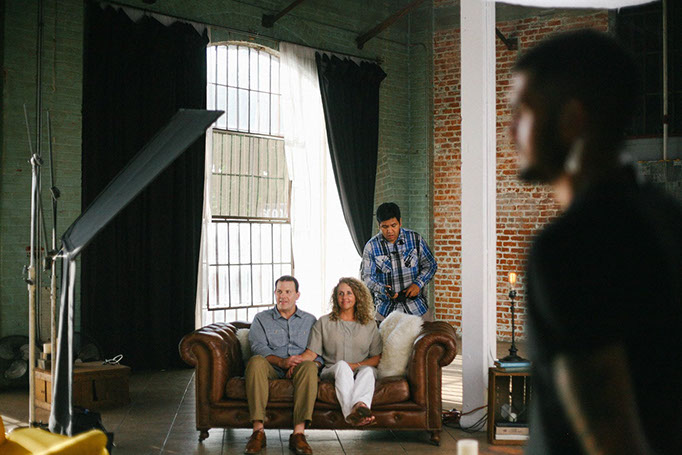 We decided on a joker bug 1600 in a large pancake chimera for the overhead source.   Rene and Key Grip Andres Solorzano created a 16 foot menace and armed the unit over the set.  The pancake is a large source, but we wanted the light to have a more ambient and natural feel, so Rene and Andres additionally hung an 8x8 half grid a foot below the pancake–  several feet above the participants heads.  This enlarged the source and made our shadows more diffuse.

Soft top light looks great on people’s faces, however we didn’t want that to be the only source, since we were going for a more ambient and natural feel.  At ground level, Rene set up two Arri M18s, and double diffused them through both an 8x8 full grid and 12x12 half grid.  The 12x12 rag was about 10-15 feet from most of the actors.

The incident reading solely from the overhead source was a bump over an f8.  After the ground source (2x M18) was added, the incident reading increased to roughly an 8/11 split.  We needed just a little bit more intensity, so we ultimately changed out the 8x8 full grid on the ground for an 8x8 half grid, which got us up to around f8 and 2/3.  (See the image on the top of this blog page to see the entire set.)

Most of the participants had a naturally occurring backlight, as their backs were to the windows, however a couple participants on the side (without a window behind them) needed a little extra separation.  Rene brought in a 4ft 4bank kino to accomplish this. 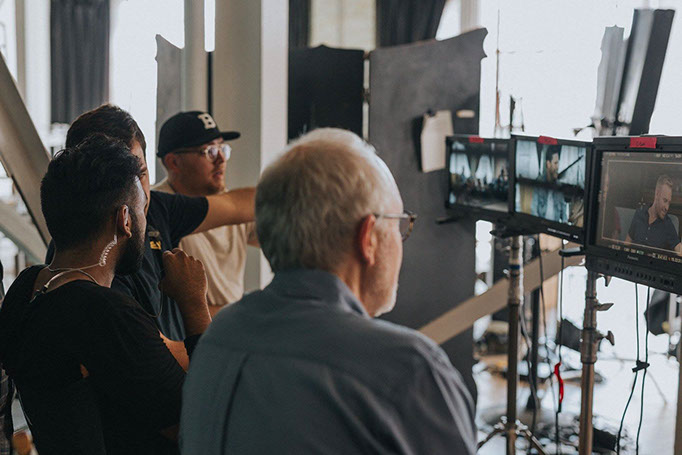 Once the set was lit, the moderator and seven roundtable participants were brought in.   Jens and I directed our three camera operators, Michael Ho, David Mori, and Ben Winchell,  from video village.

Here were our technical specs for the roundtable discussion:

- ND.6 on all cameras for approximate shooting stop of f4/5.6

Below are a couple screen shots from our round table shoot: 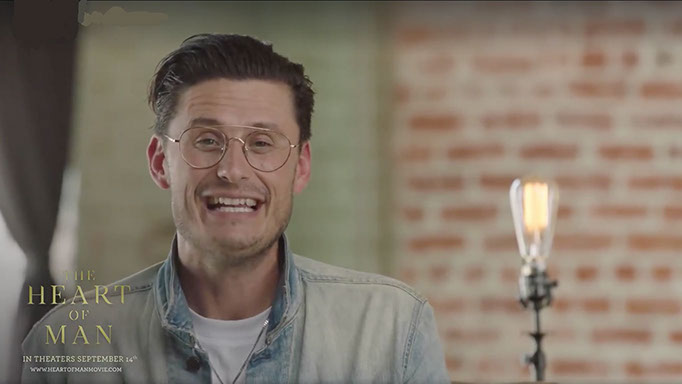 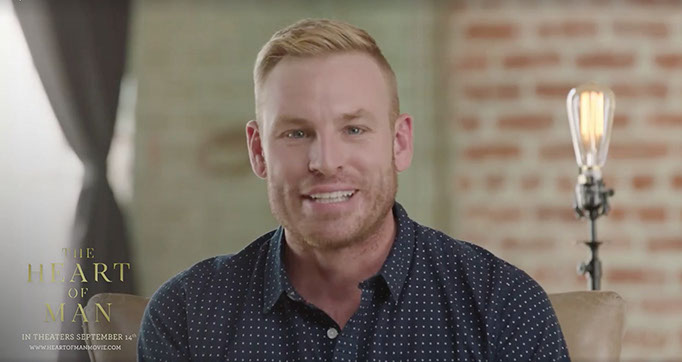 The Heart of Man was a beautiful film and the round table discussion added some valuable insight into its message.  For further information on the film, please visit the website, https://heartofmanmovie.com. 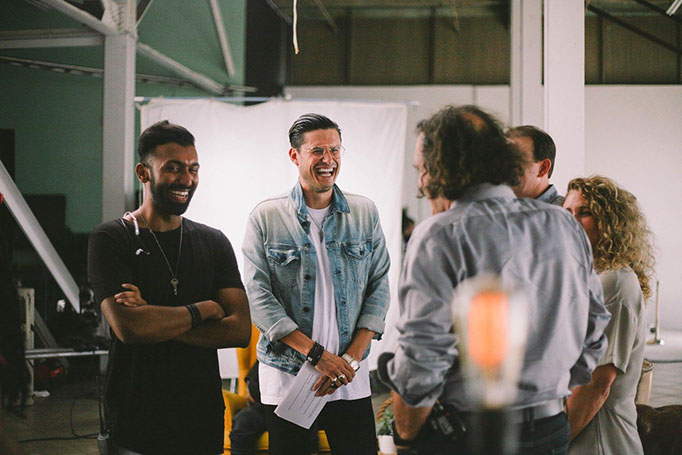 Producer Jens Jacob and Executive Producer Chad Veach enjoy a few laughs with several others prior to filming.